VBA-RunPE is an implementation of the RunPE technique in VBA. It enables running executables from the memory of Microsoft Word and Microsoft Excel. To evade detection, attackers are increasingly turning to VBA-RunPE and similar tools that achieve process hollowing.

The Palo Alto Networks Cortex XDR platform protects customers from a wide spectrum of nefarious activity, including VBA-RunPE. Over the past few weeks, the Cortex XDR Security Research Team has added several behavioral detectors for the technique. Furthermore, the release of our latest endpoint protection agent -- Cortex XDR Agent 7.2 -- can block the attack up-front.

One of the key benefits of RunPE/process hollowing is the ability to bypass application whitelisting. This is useful in constrained desktop environments (e.g. AppLocker, AppSense by Ivanti, etc).

Process hollowing on its own isn’t so new, but a VBA implementation of RunPE is a game changer. With VBA-RunPE, all an attacker needs to bypass any restriction is access to Word or Excel and VBA macros. It also allows attackers to weaponize macros without resorting to PowerShell and other less stealthy methods. With Windows Defender leveraging Microsoft’s Antimalware Scan Interface (AMSI), this has become increasingly important.

As we can see in Figure 1 below, VBA-RunPE enables an attacker to run any Portable Executable (PE) file, disguised as an Office executable. In this case, the title of the PowerShell process spawned is actually the path of winword.exe.

Once the thread is resumed, the malicious code starts running, now masquerading as a legitimate process. 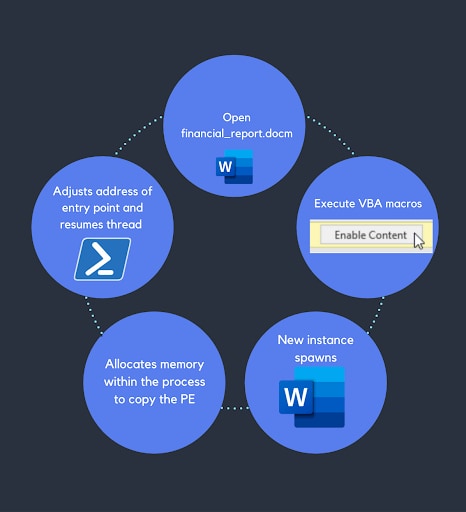 All of this process hollowing is possible through VBA because it allows for importing functions from the Windows API. The following are some of the API functions called:

One of the most common ways security vendors detect process hollowing is by monitoring API calls that unmap process memory, such as NtUnmapViewOfSection and ZwUnmapViewOfSection. But, in contrast to the majority of process hollowing implementations, VBA-RunPE doesn’t unmap the process memory, and therefore it can bypass detection by many security products.

VBA-RunPE gives an attacker the ability to run any PE file, simply by setting the path of the file to execute and the command-line arguments. The following default VBA-RunPE code in Figure 3 runs a command-line similar to powershell.exe -exec Bypass.

Below is a look into the Exploit method that gets the content of a PE file as a byte array and calls the RunPE procedure to execute it from the memory of Word / Excel. The rest of the code can be found on the VBA-RunPE Github. 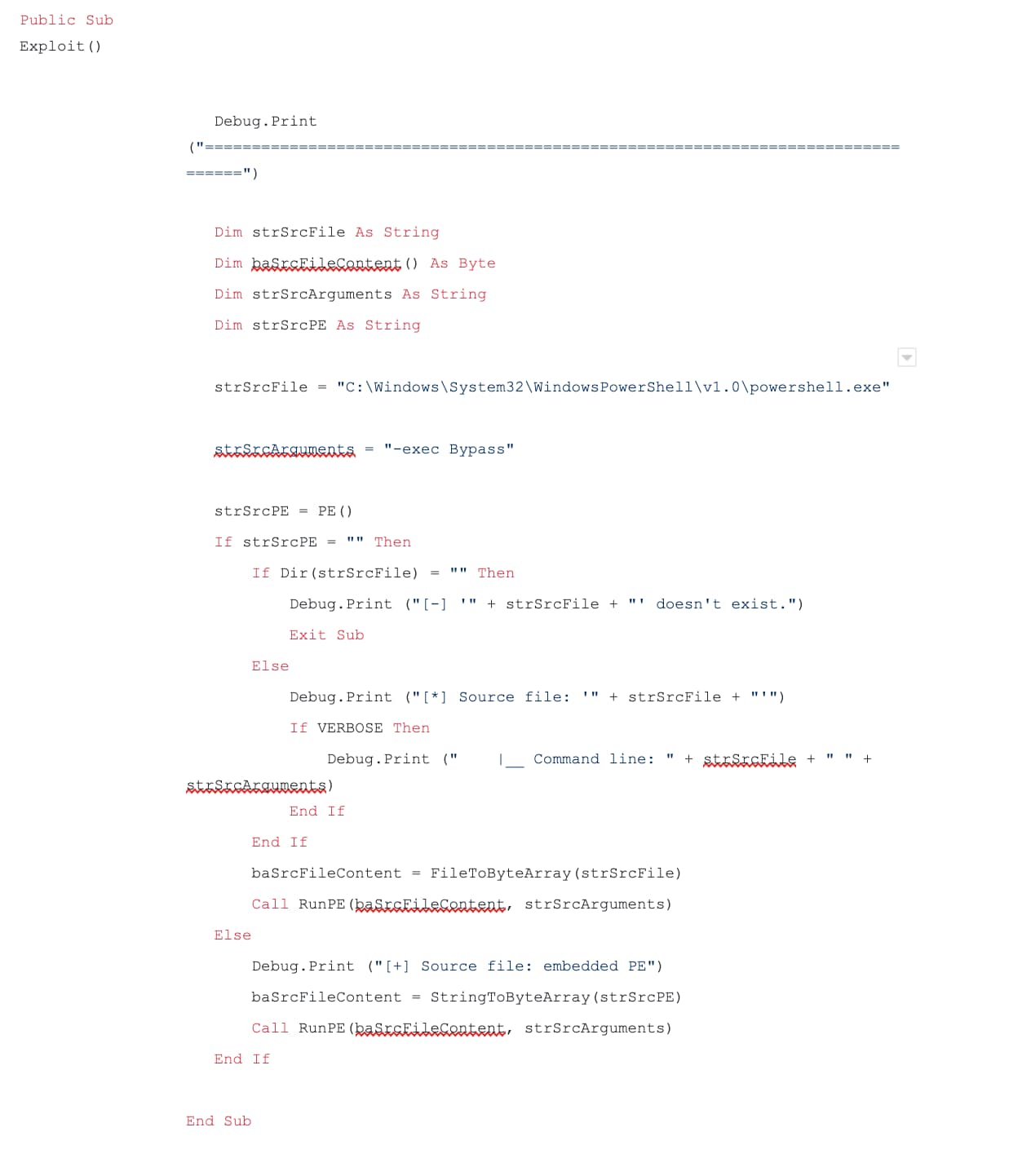 Using Cortex XDR, we observed the attack’s behavior—starting with the causality chain. The Causality Group Owner (CGO) responsible for causing the activities is our Word process that opened financial_report.docm. Once macros were enabled, a new winword.exe process was spawned in a suspended state. Lastly, the injection of PowerShell into the memory of the newly created Word process spawned the Windows Console.

Essentially, the attacker got away with spawning PowerShell as a separate process. To the unsuspecting system administrator, this activity may not appear to be malicious.

Diving deeper with Cortex XDR, we checked the process command-line arguments. In Figure 5,  we can see that Microsoft Word is spawned with the command line “Winword.exe -exec Bypass”. This is an anomalous command line, since it’s associated with PowerShell and not with Microsoft Word.

Figure 6 demonstrates a couple of interesting module loads from Microsoft Word. For example, System.Management.Automation.dll and pwrship.dll are loaded—this loading of PowerShell DLLs by a Microsoft Office process is clear unusual activity. 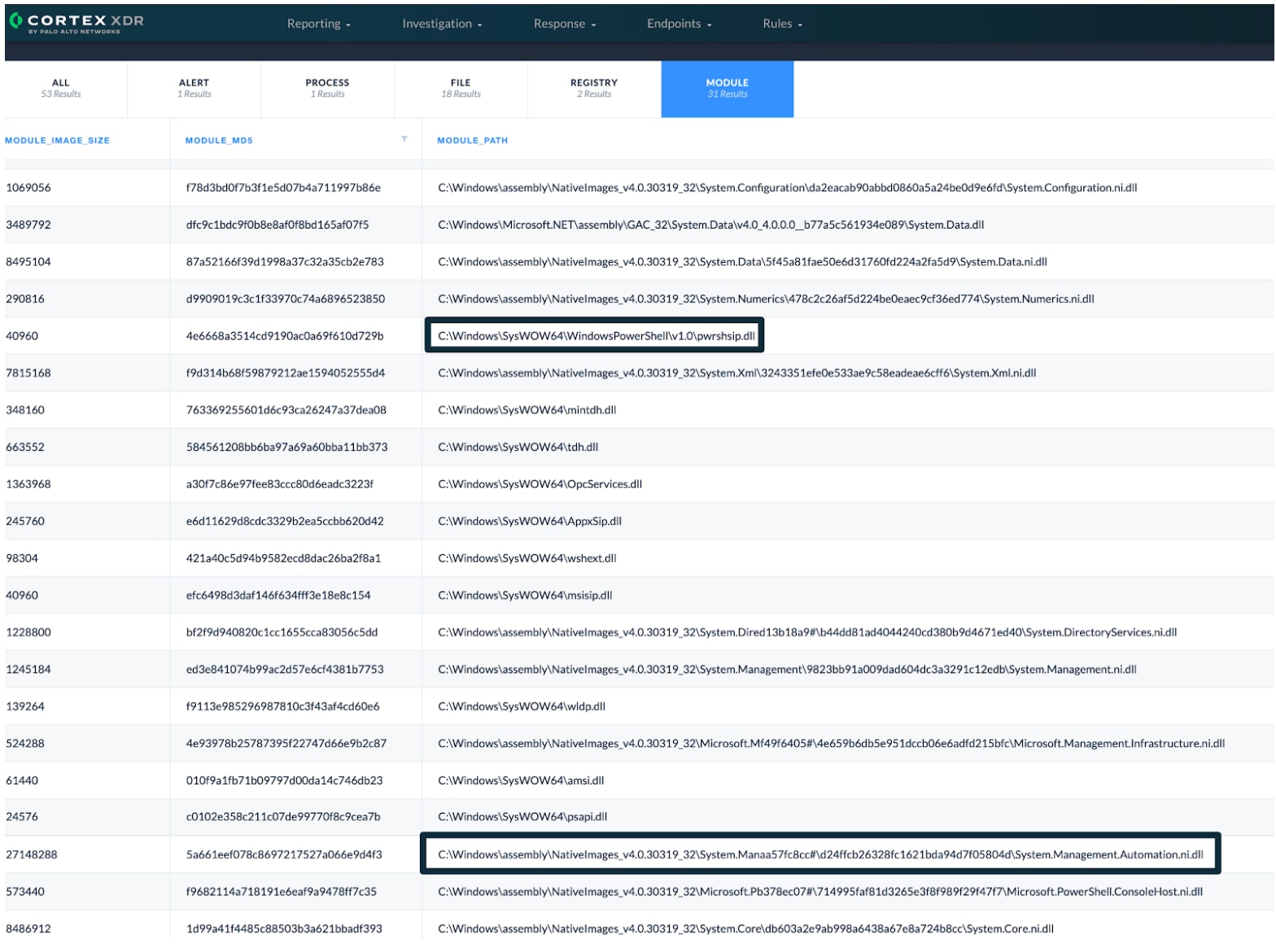 Following our look into behavioral activity with Cortex XDR, we created the following Behavioral Indicators of Compromise (BIOCs) to detect VBA-RunPE.

Process hollowing threats are complicated in nature and often go undetected. Malware authors continue to utilize these evasive process execution techniques to reduce the number of indicators on an endpoint.

Cortex XDR™ can overcome this leveraging behavioral activity to detect and block this attack at several stages of the attack chain.

The following tactics and techniques are relevant to the threat discussed. Further information can be found in the MITRE ATT&CK framework.