In the global age of today’s business, it’s tough to spot a malicious VPN access attempt from a genuine case of employee travel and access from another country. Moreover, with increased cloud adoption, there are multiple sources of geographical presence to verify, heaping more work on security teams and presenting a window of opportunity to attackers.

Some security orchestration platforms enable playbooks as not just reactive measures, but also as proactive scheduled workflows. In this case, a VPN check playbook can be scheduled to run at timely intervals and identify any VPN anomalies before escalating to security teams for further investigation. 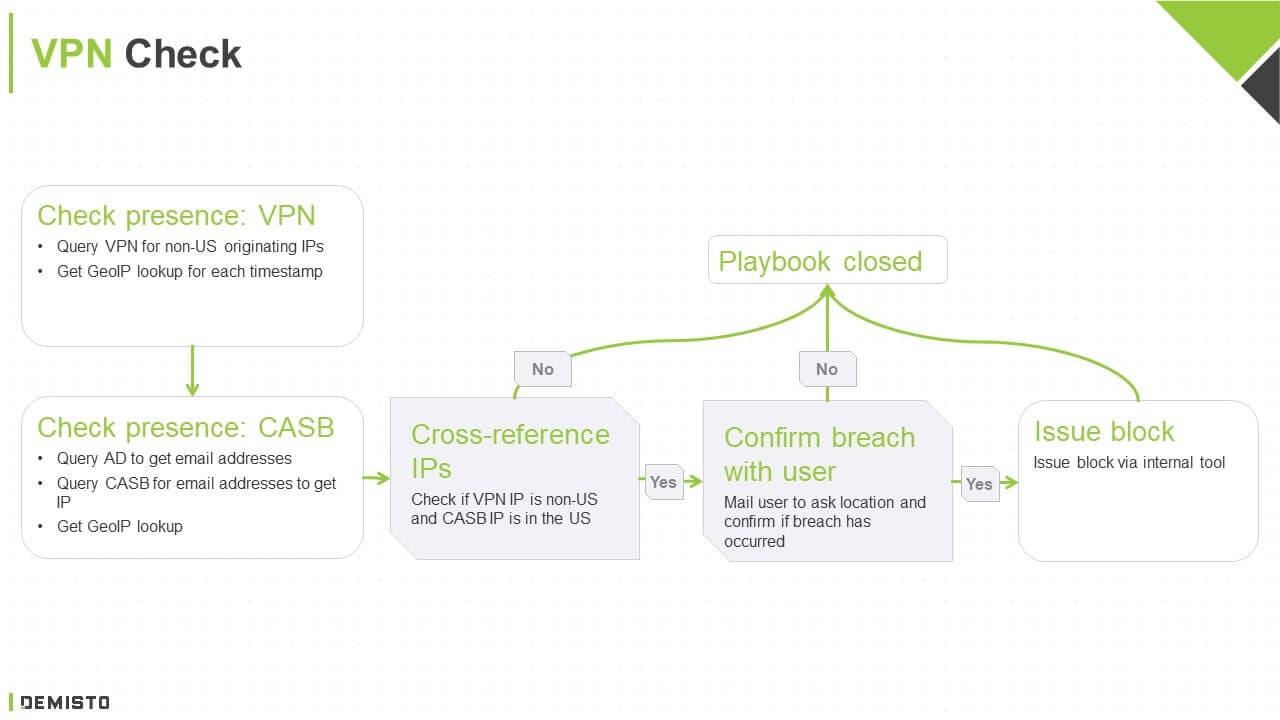 The playbook queries the VPN service for non-US originating IPs and gets the GeoIP lookup for each timestamp on those IPs.

To reconcile the VPN data, the playbook queries Active Directory for all email addresses and checks them against a CASB to retrieve IPs. The playbook then gets GeoIP lookups for each timestamp on these IPs.

If the user responds confirming the breach, the playbook blocks the concerned IP using internal tools and brings in the relevant security analyst for further investigation.

Reactive and Proactive: This VPN check playbook can be reactive - triggering every time there's a VPN anomaly detected - or can be scheduled to run at regular intervals as a 'health check' scenario. Since security teams are busy fighting daily fires, they don't have time to conduct these proactive checks that usually act as early warning signs for attacks.

Improve investigation quality: Security orchestration platforms usually correlate intelligence from multiple tools so that security teams can quickly identify whether any attacks are isolated or persistent within their environments. In this example, if security teams schedule the playbook and it finds 10 VPN anomalies across employee laptops, it's a strong indicator of a coordinated breach attempt.

To see Cortex XSOAR in action, sign up for the free Community Edition.